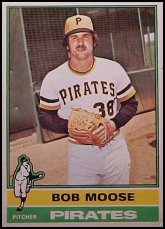 Robert (Bob) Ralph Moose Jr. (October 9, 1947 - October 9, 1976) was a Major League Baseball pitcher from 1967 to 1976. Moose spent his entire career with the Pittsburgh Pirates. His best season came in 1969 when he posted a 14-3 won-loss record and a 2.91 Earned Run Average working equally as a starter and reliever. On September 20 of that year, he no-hit the eventual World Champion New York Mets. However, he is also known for his bottom-of-the-ninth-inning wild pitch that allowed George Foster to score the winning run in the deciding game of the 1972 NLCS, sending the Cincinnati Reds to the World Series after Pittsburgh had a one-run lead entering the bottom of the ninth. This happened to be the last game of Roberto Clemente.

Moose was killed in an auto accident heading to Bill Mazeroski's golf course near Martins Ferry, Ohio, on his 29th birthday.